… Hangzhou Bobo is developing a sensor which can be implemented in, for example, an office chair. This sensor can measure several health-related data and thus can provide an employee with direct feedback and insights … Hangzhou Bobo is currently pre-occupied with creating a relationship with SUNON a Chinese office equipment producing company within China. For this partnership, there is an integrated value proposition for the sensor detailing the design and technology. This proposition is solely focused on the Chinese market and therefore not adapted to any countries outside of China. As indicated by others, companies operating in different market networks (e.g. Europe and China) need to adjust their strategies to be successful, as the context can differ both on a cultural level. Thus, it is necessary to change the current proposition into an adapted one for the European market; this, therefore, includes exploring the business landscape in Europe and defining new (design) directions for using the data in office environments in the EU.

To reach this goal, Stressvas is introduced. It is an office interactive installation using motors and projections to represent heart rate variability data, collected by sensors embedded in office chairs. It aims to stimulate a healthier working attitude through a collective visualization of employees’ stress levels. The approaches used are data-enabled design as well as the personal informatics model. By anonymously displaying the differences among colleagues in a team, employees can reflect on their own mental health from a more objective perspective. Therefore, triggering behavior change for a healthier and better workspace.

The goal of this project is to create a service for artists that helps to enlarge their audience. This will be done by making it easy to explore new artists by using Explortists. Explortists are cards linked to an Augmented Reality application. The cards should make listeners more aware of the artist and stimulate sharing music. Outcomes of user-tests confirmed the willingness to explore via the cards. It also shows that using newer technology for the applications, makes the features clear, fun and valuable. Stakeholders such as artists, record labels and venue get profit out of the concept. They can implement personal branding and make a revenue out of using the cards.

See Me Roar: an AR Game to Improve Children’s
Perception of Relatedness and Learning Motivation in Elementary Math Education

Today’s primary school teachers may find it hard to motivate their students into traditional learning activities, especially with subjects which students may find difficult and are subsequently not willing to spend much time on, such as mathematics. Educational games with Augmented Reality (AR) technology could provide a great potential for learning and are increasingly available among primary school students. However, there is a lack of understanding on how to improve student’s learning motivation through the AR educational games. In the present study, the researcher first used the method of co-design with children to shape and develop the concept of an AR game for children to practice their math skills in the social learning environment. Then, the researcher conducted a user test with four 8-12-year-old students to explore which game elements (collaboration vs. competition) in the AR game could improve their perception of relatedness and motivation based on Self-determination Theory. The results show that the collaboration version could lead to a higher perception of relatedness and more learning motivation.

The municipality of Eindhoven is always working on innovation and are working with new IoT technologies and sensors in public spaces, based on gathering and analyzing people’s data to improve the quality of life in the city.

At Stratumseind, there is such a sensor network which gathers data to solve issues in daily lives like safety. As local government, Eindhoven has to ensure that use of technology and data in the public space is visible, transparent, open, secure and respects the privacy of individuals and communities, which means that it is anonymous at all time. It is known that in Eindhoven a number of IoT / sensor networks in the public space work independently and are used by different parties and stakeholders. However, not everyone is aware of this sensor network and it has become clear that visualization and interaction with IoT in public spaces is a challenge. Especially, now privacy has become on of the main hot topics in the rapid digitizing world, think about The General Data Protection Regulation which is introduced in the EU in May 2018, (local) governments are looking for ways to implement new technologies in a transparent and democratic way. Therefore, as a leading municipality, Eindhoven wants to make it known and clear to everyone where the measuring equipment is located, what is measured and by whom, to ensure the public interest and stimulate innovation with the use of new technologies. … 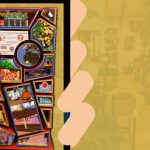 By using Augmented Reality, I tried to increase product appreciation by consumers. For my client Waar, I designed a system wherein users learn about the production of chocolate. In a store, they can download an app, and with this app, they can see the production process projected on a cabinet which displays chocolate. The concept was very positively received by the Client and by participants of user tests. Although the app does have some points of improvement, it works on a fundamental level. 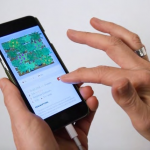 Community Makers is a platform that has as a goal to grow, strengthen and connect communities of people who are actively improving their environments. They can use the app to start projects and find collaborators, both in their own social media network and in their physical neighbourhood. The app helps manage the project with a shared task list and asks project members to take pictures throughout the process regularly. From these pictures, it creates a time-lapse video of the project being built up from the ground. Providing a nice memento that can also be shared to inspire others. This video is an important feature as it both helps strengthen intrinsic motivators such as pride and sense of accomplishment and contributes towards getting even more people enthusiastic about improving their neighbourhoods.

The project revolves around the Freezing of Gait (FOG) phenomenon occurring among elderly patients with Parkinson’s disease (PD). FOG is the temporary, involuntary inability to move and it can be experienced on turning, in narrow spaces, whilst reaching a destination, and in stressful situations. FOG is one of the most disabling and common mobility disorder in PD, and is usually observed in the advanced stages of the disease (Nieuwboer, 2013). Gait impairment and FOG seriously affect the quality of life of patients as it can lead to an unpredictable loss of control over movement and can result into falls.

The effectiveness of the Sensory cueing in improving gait in PD patients has been established by different researchers (Bagley, 1991) (Freedland, 2002). Sensory cueing can be defined as the use of external temporal or spatial stimuli to facilitate movement, gait initiation and continuation (Nieuwboer, 2007). It can be divided into three modalities: visual cueing; auditory cueing; and tactile cueing. Visual cues help to enlarge the stride length and generate sufficient amplitude movement (Azulay, 1999), while auditory cues help to stabilize the gait timing (Freedland, 2002).

The goal for this project is to combine the established scientific knowledge on FOG and Sensory cueing with an in-depth User Research into the design of an intelligent product/service for the assistance of a more independent lifestyle for PD patients with FOG symptoms.

In this document it is described my design vision and connected to it motivation for my Final Master Project. After, information about the context and project can be found. It is illustrated the project development, design approach, outcomes and future steps. 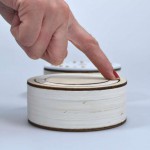 This report details the combined work of Bram de Vogel (B3.2 Final Bachelor) and Myrte Thoolen (Pre-Master) in semester 1 2015-2016. We developed the “Eve” Sleep Diary concept within the context of the project Tools for Medical Professionals and the project track Sleep in particular. The design challenge in the project was to develop a new sleep diary for use in the treatment of patients with insomnia. For our final concept, we designed “Eve,” a hybrid physical-digital sleep diary. Eve aims to improve the sleep logging experience for insomnia patients and to provide medical specialists with more quality and
quantity of patient sleep data, significantly benefitting the treatment.
Within this report, you may find an extensive description of the “Eve” Sleep Diary, description and analysis of the original problem, the design process as well as future development (recommendations). We have also added individual reflections regarding the project and our individual growth as designers.

The project revolves around the Freezing of Gait (FOG) phenomenon occurring among elderly patients with Parkinson’s disease (PD). FOG is the temporary, involuntary inability to move and it can be experienced on turning, in narrow spaces, whilst reaching a destination, and in stressful situations. FOG is one of the most disabling and common mobility disorder in PD, and is usually observed in the advanced stages of the disease (Nieuwboer, 2013). Gait impairment and FOG seriously affect the quality of life of patients as it can lead to an unpredictable loss of control over movement and can result into falls.

… The goal for this project is to combine the established scientific knowledge on FOG and Sensory cueing with an in-depth User Research into the design of an intelligent product/service that can assist a more independent lifestyle for PD patients with FOG symptoms.