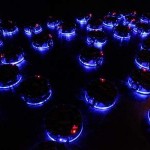 Tom’s Guide published an article by Paul Escallier, in which the AdMoVeo is featured as one of the “30 Inventions From Regular Guys”. We are happy to see that AdMoVeo is getting more attention, although we are listed as “regular guys” 🙂

Read the part about AdMoveo or you may want to have a look at all these inventions.

Abstract – Lego Mindstorms NXT is a platform highly suitable for prototyping in the field of interactive social robotics. During a technology masterclass at Eindhoven University of Technology students from the department of Industrial Design have developed five novel extensions (sensors and actuators) for the Lego Mindstorms NXT which extend the ability of Lego to prototype for robotics even further. Applications include a water-pump, GPS sensor, wireless sensor bridge, optical mouse sensor and a magnetic grabber. In this paper we will present these extensions and showcase applications in which these extend possibilities of Lego Mindstorms NXT to a new level.

Abstract: Robots have been introduced into our society, but their social role is still unclear. A critical issue is whether the robot’s exhibition of intelligent behaviour leads to the users’ perception of the robot as being a social actor, similar to the way in which people treat computers and media as social actors. The first experiment mimicked Stanley Milgram’s obedience experiment, but on a robot. The participants were asked to administer electric shocks to a robot, and the results show that people have fewer concerns about abusing robots than about abusing other people. We refined the methodology for the second experiment by intensifying the social dilemma of the users. The participants were asked to kill the robot. In this experiment, the intelligence of the robot and the gender of the participants were the independent variables, and the users’ destructive behaviour towards the robot the dependent variable. Several practical and methodological problems compromised the acquired data, but we can conclude that the robot’s intelligence had a significant influence on the users’ destructive behaviour. We discuss the encountered problems and suggest improvements. We also speculate on whether the users’ perception of the robot as being “sort of alive” may have influenced the participants’ abusive behaviour.