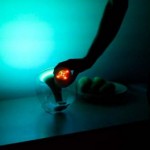 The thesis describes the design and development of an ontology and software framework to support user interaction in
ubiquitous computing scenarios. The key goal of ubiquitous
computing is “serendipitous interoperability”, where devices
that were not necessarily designed to work together should be
able to discover each other’s functionality and be able to make
use of it. Future ubiquitous computing scenarios involve hundreds of devices. Therefore, anticipating all the different types
of devices and usage scenarios a priori is an unmanageable
task.

An iterative approach was followed during the design process, with three design iterations documented in the thesis. The
work was done in close cooperation with designers and other
project partners, in order to elicit requirements and maintain a
more holistic view of the various application areas.

Ontologies are formal representations of concepts in a domain of interest and the relationships between these concepts.
They are used to enable the exchange of information without
requiring up-front standardisation. The ontology described in
the thesis helps developers to focus on modelling the interaction capabilities of smart objects and inferring the possible connections between these objects, making it easier to build smart
objects and enable device interoperability on a semantic level.

Rather than just describing the low-level hardware input event
that triggered an action, interaction events in the ontology are
modelled as high-level input actions which report the intent of
the user’s action directly. This allows developers to write software that respond to these high-level events, without having
to support every kind of device that could have generated that
event. The event hierarchy can be inferred using semantic reasoning.

The software architecture implements the publish/subscribe
messaging paradigm, enabling smart objects to subscribe to
changes in data, represented in triple form, and be notiﬁed every time these triples are updated, added or removed. Semantic
reasoning is performed on an information broker, simplifying
the implementation on the smart objects.

A pilot deployment, composed of heterogeneous smart objects designed and manufactured by a range of companies and
institutions, was used to validate the design. A performance
evaluation was performed, where the results indicated acceptable response times for a networked user interface. A usability
analysis of the ontology and system implementation was performed using a developer questionnaire based on an existing
usability framework. Various ontology design patterns were
identiﬁed during the course of the design, and are documented
in the thesis.

The resulting design artefact is an ontology for user interaction with devices in a smart environment, where devices are
able to share interaction events and make use of each other’s
functionality.