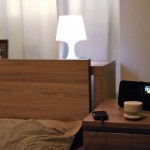 This thesis approaches the issue of interoperability between devices and services in thehome f rom a design perspective. It builds on the fundamental idea of ubiquitous computing; that the majority of our products and devices will be able to interconnect and interoperate. This tenet faces designers with a challenge: to create meaningful interactions for users to deal with the complexity of the ecosystem of interoperating devices they function in.

When moving away from interaction with a single product towards interaction with a system of products, designers need to nd ways to communicate the relationships between the products and the larger system they are part of. Additionally, designers are challenged to communicate the possibilities of new, emergent functionalities, that emerge when products are being interconnected. This paradigm shift changes the way action and function are coupled and spatially distributes user interaction.

This thesis introduces a Semantic Connections Theory, where we view smart environments in terms of connections and associations between the artefacts (Smart Objects) and actors within the environment. In this theory semantics is pivotal. A connection is a semantic connection when it describes the relationship between two entities in a smart environment and focuses on the semantics|or meaning|of the connection between these
entities. The theory was developed through a series of design iterations, exploring and testing various ways of interacting with otherwise invisible connections, enabling users to manage the connections and information exchanged between devices in their homes.

Building on a semantic interoperability platform which enables devices to interconnect and interoperate at a semantic level, the design explorations were implemented and tested in users studies. These user studies aimed at eliciting the users’ mental models to investigate how users conceptualise the connections and the information they carry.

Based on our theory, a framework is introduced in which meaning, action and function are coupled. The framework is based on existing theories of product semantics and user interaction. It uses and extends these theories beyond their traditional focus on the appearance of objects and interaction with them in isolation, towards designing for systems of inter-operating products.

The framework is evaluated by discussing examples of products and design prototypes that implement the underlying theory, and by asking six designers to use it analytically and generatively. The framework is aimed to help designers and developers of interoperable smart objects to deal with the challenges in contemporary interaction design. The results of the evaluation show that the framework is understandable, applicable and useful, and can be used by designers to analyse and aid the design of interoperable smart objects.